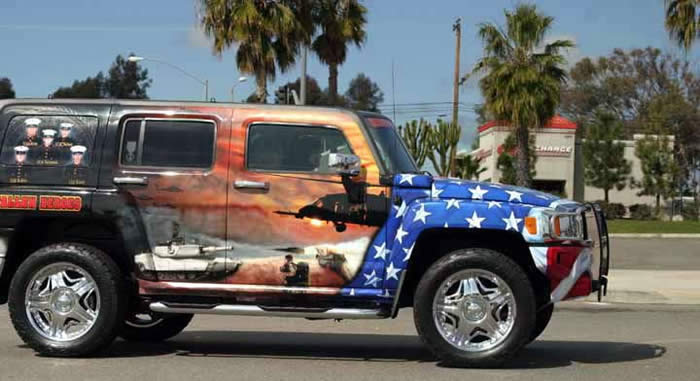 I feel a brotherhood and a closeness
with the military and their families;
beyond the average.
And I get emotional when I see and feel,
heart and mind such as the one depicted here..

Karla Comfort received a lot of looks and even some salutes from people when she drove from Benton, Ark., to Camp Pendleton, Calif., in her newly-painted, custom Hummer H3 March 2. The vehicle is adorned with the likeness of! her son, 20-year-old Lance Cpl. John M. Holmason, and nine other Marines with F Company, 2nd Battalion, 7th Marine Regiment, 1st Marine Division who where all killed by the same improvised explosive device blast in Fallujah, Iraq, in December.

The image of the 10 Marines was a way to pay homage to her hero and his fellow comrades who fell on Iraq’s urban battlefield.

“I wanted to let people know (Marines) are doing their jobs honorably, and some of them die,” said the 39-year-old from Portland, OR “I don’t want people to forget the sacrifices that my son and the other Marines made.”

Leading up to her son’s death, Karla Comfort had received several letters from him prior to his return. He had been deployed for five months, and Comfort “worried everyday he was gone until she got the letters and found out the date he was coming home,” she said.

Marines knocked on the front door of her home in Farmington, Mich., at 3 am with the dreadful news.

“I let my guard down when I found out he was coming home,” she said. “There are times that I still cannot believe it happened. It’s very hard to deal with.”

Karla Comfort came up with the idea for the rolling memorial when she and her two other sons attended John’s funeral in Portland, Ore.

“I saw a Vietnam (War) memorial on a car, and I said to my son Josh, ‘we should do something like that for John,’ she recalled. “He loved Hummers.”

She purchased the vehicle in January and immediately took it to AirbrushGuy & Co. in Benton, Ark., where artist Robert Powell went to work on changing the plain, black vehicle into a decorative, mobile, art piece.

“I only had the vehicle for two days before we took it in,” she joked.

Two hundred and fifty man-hours later, Powell had completed the vehicle. The custom job would have cost $25,000.  Out of respect for Karla Comfort’s loss and the sacrifices the Marines made, AirbrushGuy & Co. did it for free. Comfort only had to purchase the paint, which cost $3,000.

“I love it,” she said. “I’m really impressed with it, and I think John would be happy with the vehicle. He would have a big smile on his face because he loved Hummers.”

Karla Comfort gave Powell basic instructions on what to include in the paint job. But in addition to the image of her son in Dress Blues and the faces of the nine other Marines, there were several surprises.  “He put a lot more on than I expected,” she said. “I think my favorite part is the heaven scene.”

On the left side of the vehicle, a detail of Marines are depicted carrying their fallen comrades through the clouds to their final resting place. The American flag drapes across the hood, the words, “Semper Fi” crown the front windshield and the spare tire cover carries the same Eagle Globe and Anchor design that her son had tattooed on his back.

“All the support I have been getting is wonderful,” she said.

Karla Comfort decided to move back to her hometown of Portland, and making the cross-country trip from Arkansas was a way for her to share her son’s story. It’s also her way of coping with the loss.

“Along the way I got nothing but positive feedback from people,” she said. “What got to me was when people would salute the guys (Marines). It’s hard to look at his picture. I still cry and try to get used to the idea, but it’s hard to grasp the idea that he’s really gone.”

John Holmason believed in what he called the “Marine way,” his father Timothy said from the family home in Scappoose, Ore., a town of about 5,000 people roughly 20 miles north of Portland. “He believed in the Marines and what they stood for.”
John’s life in tiny Scappoose was the outdoors. He loved to hunt and fish. His dad still talks about the 38-pound king salmon John landed as a kid on a fishing trip with his grandfather.
He played Pop Warner football, golf in high school. He was an Eagle Scout and was well-liked and well-known in his small town. But John didn’t know where life would take him after high school. He thought about college, his father said, but didn’t want to go just to go. He wanted experience, something beyond the jobs he had taken out of high school. The Marines and the “Marine way” stood out, his father said, as a fit for his strong beliefs.
He became a Marine in September 2004. By March 2005 he, too, would become a member of the 2-7. He shipped out on the Fourth of July, first for Kuwait, then for Fallujah.
Back home, the Holmasons were concerned about their son, but they knew this:
“If he was going over there, he couldn’t have gone with better people. They will cover each others’ back until the end and, if called for, he was going to cover his friends’ backs,” Timothy Holmason said. “He knew the possibilities (of harm) were there, but he believed in the Marine way. That’s what he decided.”
Holmason’s body will arrive at Dover Air Force Base, Del., on Friday. His buddy, Lance Cpl. Adam Hayward will escort his fallen friend on the long ride home. Services are Sunday.

Holmason leaves behind his father, Timothy, of Scappoose; his mother, Karleen Comfort of Farmington Hills, Mich., and his grandfather Richard Holmason of Portland, Ore.

Clay, of Pensacola, Fla., was a husband to wife Lisa, a son to Sara and Clarence Clay, a leader to his men in the 2-7. A platoon sergeant, he was assigned to the 2nd Battalion, 7th Marines, two years ago in November 2003 and left for Iraq with his men in July.

Adam Kaiser was among the youngest who died Dec. 1. The 19-year-old rifleman was born the day before Independence Day, 1986, in Loudon County, Va., and had been with the 2-7 just two months before he got the order to head to Iraq in July.

He is survived by his parents, Christine and Wade of Romeoville, Ill.

Lance Cpl. David A. Huhn was 24 years old. He, too, was assigned to the 2-7 in March, joined the Marines a month after Holmason did, in October 2004. Like Holmason, Huhn was a rifleman.

He leaves his mother, Diane, of Portland, Mich.

Lance Cpl. Robert A. Martinez was 20. Houston-born, he enlisted in the tiny Texas town of Splendora in June 2003. By November 2003, the young rifleman was one of the men of the 2-7. He shipped out to Iraq with his unit in July.

He leaves his mother, Kelly Hunt of Splendora.

Anthony McElveen, like many of the men who lost their lives on the first day of December, was just 20 years old. But the young man and husband who joined the corps from Little Falls, Minn., was serving as a team leader when he and his men shipped out to Iraq in July.

He is survived by his wife, Carrie; and his parents, Debra and Thomas of Little Falls.

Scott T. Modeen, like McElveen, was a Minnesotan, born in the Twin Cities suburb of Edina.
At 24, he also was a team leader, joining the Marines in 2003. He would have marked his second year with the 2nd Battalion, 7th Marines in January.

He is survived by his father, John, of Inver Grove Height, Minn., and mother, Kimberly, of Blaine, Minn.

Craig Watson was a rifleman with the 2-7. The Kansas-born 21-year-old became a Marine in June 2003 and by November of that year was assigned to the 2nd Battalion, 7th Marines.

Watson is survived by his father, Jay, of Caro, Mich., and mother, Shirley, of Union City, Mich.

Andrew Patten had just been assigned to the 2nd Battalion, 7th Marines when his unit got the call in July. He joined the unit in March as a rifleman. Among the youngest of the men, he was 19 years old.

Patten is survived by his father, Alan, and mother, Gayle Nachansky, both of Byron, Ill.

At 29, Andy Stevens was the eldest of the 10 who lost their lives. A 10-year Marine Corps veteran, the Wisconsin-born Stevens was a scout sniper in his third year with the 2-7 when he died.

Stevens is survived by his father, Allen, of Tomah, Wis., and mother, Kaye Olson, of Maryland Heights, Mo.